The course provided a great description of selected technologies.

This course is organized in collaboration with EMPA.
The FSRM discounts don't apply to this course. The course language is English.

Our daily living is governed by a comprehensive, omnipresent and ubiquitous information network with a remarkably small, continuously shrinking “grid size”. Implanted and portable biomedical devices, sensor-assisted navigation, portable multimedia, distributed sensor networks, smart label technologies, mobile communication or portable IT systems are the forerunners of this revolutionary trend that is gaining importance in almost every living and working environment. Together with that, the serious question arises, how a widely distributed network of embedded systems should be supplied with energy.

Micro Energy Harvesting, i.e. the conversion of ambient energy into the supply energy required for an embedded system, is a promising perspective, as it would make the nodes truly energy-autonomous, without the need of power grids or batteries. However, a simple replacement of the battery or the supply cord by a local “micro power plant” will not solve the task. In contrary, micro energy harvesting relies on a thorough design of the whole embedded system. Micro energy converters have to be provided with a size and function compatible to the respective application site. The varying availability of ambient energy will require an efficient intermediate storage to bridge phases of low supply, as the back-up power grid is not available. An efficient energy management has to transfer the electrical energy between all subsystems in an optimal way. Finally, the energy consumption of the system node itself has to be minimized to a high extent by appropriate design and system control measures.

These issues define an extremely widespread field of research and development that is not easily covered in a one-day course. Therefore, this course will give, on one hand, an overview of the actual state of the art in microgenerators with some detail remarks on generator design, a thorough description of relevant energy storage concepts and an overview on electronic power management. Finally, practical examples of energy-autonomous embedded systems will be discussed in various fields of applications, e.g. in building infrastructure or automotive applications.

This course is designed for the practicing scientist or engineer, but also for a technical marketing person, to provide an overview on the wide field of energy harvesting and also a selected in-deep knowledge on various areas of this widespread discipline, e.g. the design of microgenerators, of power management, and some insight into application scenarios. 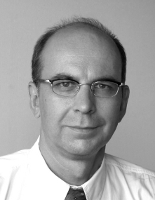 Prof. Dr. Peter Woias graduated in electrical engineering at the Technical University of Munich in 1988. He also received his doctorate from the TU Munich, working on the application of Ion Sensitive Field Effect Transistors (ISFETs) in flow injection analysis. He has started his post-doc career at the Fraunhofer Institutes for Solid-State Technology and for Microelectronic Circuits and Systems, both in Munich, as group manager and, later, head of the department Micromechanics, Actuators and Fluidics. During this time he was directing basic and industrial research on various microfluidic devices and systems, like, e.g. micropumps, microvalves or micro flow sensors.

Since 2000 Peter Woias is a full professor and head of the Laboratory on Engineering Design of MEMS at the Dept. of Microsystems Engineering (IMTEK) of the Albert-Ludwig-University Freiburg. His actual research focuses on microfluidics for medical applications, chemical micro process engineering, micro energy technology and microfabrication.

Peter Woias is a member of the German associations of electrical and industrial engineers (VDE and VDI). In 2003 and 2004 he was chairman of two SPIE Conferences on “Microfluidics, BioMEMS and Medical Microsystems”, both held in San Francisco, CA. In 2007 he was chair of the technical program committee of the PowerMEMS 2007, held in Freiburg, Germany. Peter Woias has been appointed with the Robert T. Knapp award of ASME in 2005 and was a winner of the 2003 German BMBF competition “Innovation in medical technologies”. Since October 2006 he is the executive speaker of the German research training group GR 1322 “Micro Energy Harvesting”. His own research in energy harvesting is on piezoelectric and thermoelectric generators, on micro heat engines and on energy-autonomous embedded systems.