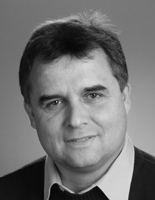 is head of the “Advanced Materials and Surfaces” Department at Swiss Federal Laboratories of Materials Testing and Research (EMPA)in Thun and member of the board of directors. P. Gröning received his diploma in electro technique from the engineer school in Biel, Switzerland in 1981. After a period of four years, where he worked on the development of electronic high power converters at BCC later ABB in Turgi, Switzerland, he studied physics and mathematics at the University of Fribourg, Switzerland. He received his diploma and Ph.D. degree in 1989 and 1993, respectively. From 1993 till 2002 he was responsible for the research activities on plasma treatment and deposition in the physics department at the University of Fribourg. In 2002 he joined EMPA in Thun, Switzerland.

Problem fetching Courses, or currently not giving a course.