After attending this course, the participants will have a sound knowledge in current MEMS sensors and devices, their design and fabrication, well prepared to enter the commercial opportunities this field currently is offering.

MEMS (Micro-electro-mechanical systems) are undoubtedly an enabling key technology for the 21st century, as they can contribute to solutions for practically all grand societal challenges humanity is facing, such as sustainable growth, mobility, environmental problems, health and renewable energy. This fascinating and multidisciplinary research field will certainly strongly grow over the next years, and already represents an important economic factor. MEMS based technology currently has an estimated worldwide revenue of 20-25 billion USD and a forecast of 15-20% annual growth for the foreseeable future.

The short course will provide an introduction to MEMS sensors and devices. The first day will present some market forecasts and a general overview of the field. It then will focus on fabrication technologies on how to realize MEMS devices. The second day will mainly focus on applications of MEMS devices, their operation and future developments. MEMS devices that will be discussed will include physical sensors such as accelerometers, gyroscopes and pressure sensors, which now can be found in very smartphone, but also include inertial sensors for aerospace applications and oil & gas resource detection, resonant based sensors for bio-medical applications, sensors for autonomous vehicles (e.g. MEMS scanning mirrors for LIDARs), energy harvesters, chemical sensors for environmental monitoring and pressure sensors for medical and industrial applications.

The short course will also briefly review recent trends in industry and academia and highlight emerging technologies that are promising for future developments, such as coupled resonators, piezoelectric transducers and devices, as well as packaging, which is often an underestimated field.

Engineers from companies planning to enter or recently have entered the field of MEMS devices. Postgraduate university students planning to work on MEMS for their PhD or Master project. 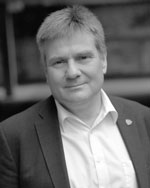 Michael Kraft is a Professor of Micro- and Nanosystems at the University of Leuven, Department of Electrical Engineering, MICAS group.

From 2015-2017, he was at the University of Liege, Department of Electrical Engineering and Computer Science and from 2012-2014 at the Fraunhofer Institute for Microelectronic Circuits and Systems in Duisburg, Germany, where he headed the Department of Micro- and Nanosystems focussing on fully integrated microsensors and biohybrid systems. He concurrently held the W3 Professorial Chair of Integrated Micro- and Nanosystems at the University of Duisburg-Essen. From 1999 to 2012 he was a faculty member and Professor of Micro-System-Technology at the University of Southampton, UK. Concurrently, he also was the director of the Southampton Nanofabrication Centre. He graduated with a Dipl.-Ing. (Univ.) in electrical and electronics engineering at the Friedrich Alexander Universität Erlangen-Nürnberg in 1993. In 1997 he was awarded a PhD from Coventry University on the development of a MEMS accelerometer. He then spent two years at the Berkeley Sensors and Actuator Centre at the University of California working on integrated MEMS gyroscopes.

He has 20 years of experience in micro- and nano-fabrication techniques, microsensors and actuators and their interface circuits, in particular for capacitive sensors. He has a broad interest in MEMS and nanotechnology ranging from process development to system integration of MEMS and nano-devices. In 2005, his research group developed the world’s first fifth order sigma-delta-modulator (SDM) interface for a MEMS accelerometer, and in 2007 a band-pass SDM for a MEMS gyroscope. He has done ground-breaking work on electrostatically levitated micro-objects for sensing and actuation applications, and developed several novel, micro-fabricated atom and ion chips. He has published over 250 peer reviewed journal and conference publications as an author or co-author. He also contributed to three text books on MEMS, and edited a book on MEMS for aerospace and automotive applications. He has served or currently serves on several steering and technical committees of international conferences such as IEEE Sensors, Eurosensors, Transducers, ISSCC, MNE and MME, as well as being a senior editor for IEEE Sensors Letters and associate editor for the Sensors and Sensor Systems Journal. He also has done industrial consultancy for many companies active in the MEMS field.